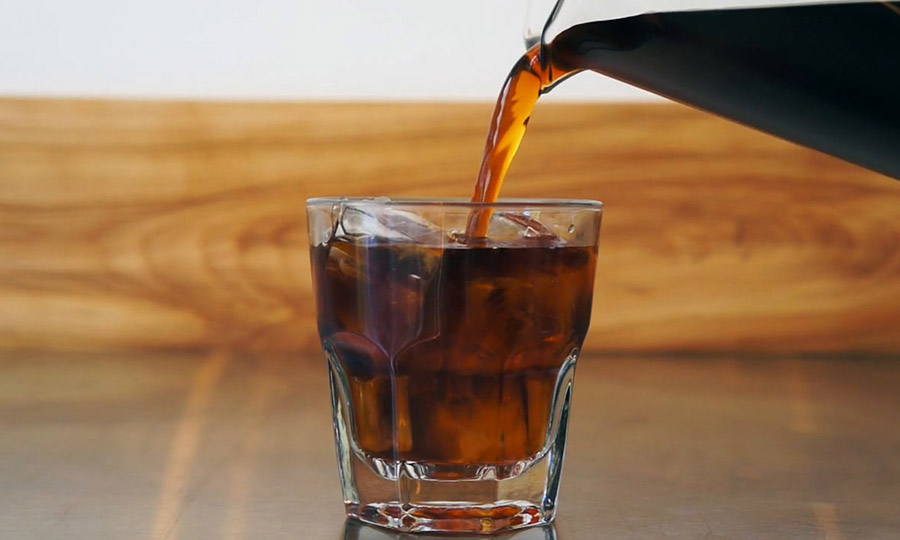 Cold brew coffee is simply a recipe of ground coffee steeped in cold water for 12-24 hours. At no time does hot water touch the coffee grounds. Once the desired Total Dissolved Solids (TDS) is achieved, you remove the coffee grounds. This process yields a coffee that has less acidity and 33% higher caffeine content. As you may have guessed, cold brew coffee is used as an iced coffee. Retailers have created the environment for these products to grow rapidly because many have ruined the iced category over the past several years by using old, bitter tasting brewed coffee as the base for their iced coffees.

Even worse, many have used coffee extracts to make their iced coffees. We are in the coffee “Third Wave” or arguably 4th Wave which has put an emphasis on specialty coffee, and precise brewing styles for hot coffees and espresso, so it’s only natural for this to turn to the iced coffee category with unique brewing methods. Since our palettes have become more refined over the past two decades, a better iced coffee product was an organic fit.

Just as consumers are chilling out with their cold brew coffees, BAM!! They’re introduced to Nitro Cold Brew Coffee! So, what is Nitro Cold Brew Coffee? It’s cold brewed coffee filled into containers, mainly Cornelius kegs.  Through a time consuming process of vacuuming out the oxygen and infusing the containers with nitrogen, NITRO COLD BREW COFFEE is born. When poured on tap like a beer, it cascades through the glass like a Guinness Beer, leaving a creamy head on the top. When sipped, the nitrogen disperses the flavor across your tongue giving you our velvety smooth, creamy taste.

Starbucks recently announced they will be introducing Nitro Cold Brew Coffee in 500 locations on top of their existing cold brew. Dunkin Donuts, one of the nation’s largest retailers of iced coffee also launched a national campaign for cold brew coffee. These massive campaigns by two of the largest iced coffee retailers will create a much larger consumer awareness resulting in an increased demand for this phenomenal product. The bar has been raised…. Game on.

Our brand Ironbound Cold Brew honors our neighborhood, “The Ironbound” and the past breweries which have called Newark, NJ home. Its name is derived from the area being surrounded by the iron railroads that helped build this logistical hub. Historically the “Brick City” was home to beer breweries, including Ballantine, Rheingold, Feigenspan and Pabst. Even today as you fly into Newark Liberty International Airport you’ll see the large Anheuser-Busch InBev sign where Budweiser and Rolling Rock are brewed. Our Nitro Cold Brew Coffee is born here in the Brick City, like so many beverages before us.

We spent close to 12 months to developing this delicious product. First, we cold brewed several single origin and coffee blends along with different roast profiles to achieve the taste we liked best. At the same time, we narrowed down the grind profiles and coffee to water ratios rounding. To standardize the process for the desired TDS, we experimented with different water and coffee filtration methods. Once we had the perfect cold brew coffee, we needed to figure out how to nitrogenize the coffee in kegs. Through more trials than I can count, while driving our R&D team to near mental breakdowns, we finally developed the methods to have the nitrogen permeate through the coffee. This tedious process is what creates the beautiful cascade through your coffee. We did so much work on this, and know how successful it could be, we felt this product should benefit more than just the coffee community. So one last thing we did was partner with a phenomenal charity, Autism Speaks. They help fund biomedical research in the many aspects of autism while also raising public awareness.

With as GREAT as nitro cold brew coffee is, it does NOT come without MAJOR concerns. In conjunction with Rutgers University’s Food Innovation Laboratory, beer and wine brewers, gas companies, as well as equipment manufacturing companies we were able to identify the proper shelf life of kegged nitro cold brew coffee. Most coffee companies have not properly addressed the danger in wholesaling a product that has no “kill point” for bacteria like with hot coffee. It’s something roasters haven’t really had to deal with when selling drip coffee. Hot water at a rolling temperature near boiling kills the bacteria. Now, companies cold brewing coffee with no filtered water and in unsanitary kegs, leave the potential for pathogens to grow which can get people extremely sick. Moreover, retailers need to clean the coffee lines on the beverage systems, a procedure that restaurant owners are familiar; cleaning beer and soda lines. If left unattended, the lines will develop mold resulting in consumers getting sick.

As we’ve seen from the beer industry, craft brewing comes at a price. The cost on making a nitro cold brew or even a cold brew coffee is more expensive than that of a traditional iced coffee. But at the same time, it also commands a higher price point to the consumers, resulting in higher profits. At the moment, there aren’t many retailers selling this product, which gives them a unique advantage over their competition. The rarity of the product, coupled with cell phone wielding coffee consumers, you see photos of this Guinness looking coffee all over social media tagged at those shops. Expanding on the product, savvy restaurateurs and café owners are infusing nitro coffees with other product such as beers, liquors and even ice cream floats!

The simple fact is, as cold brew and nitro brew coffees take over, standard iced coffees will fade away. The “Third/Fourth Wave” of coffee is recreating the coffee experience for people. It’s not just a “coffee” or “iced coffee” anymore, people want more, and are willing to pay for it. Cold brew or NITRO cold brew is simply a superior product and, if you haven’t had one, run out and treat yourself right now, cheers!