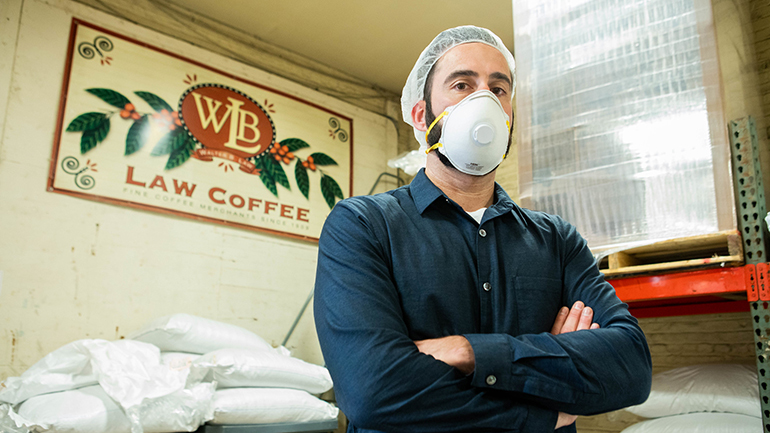 With everything seemingly in chaos, Law Coffee needed TD Bank now more than ever

David W. Mendez, TD Bank small business customer and owner of Law Coffee, was expecting 2020 to be his year.

He just married the love of his life and in January, purchased the Newark, New Jersey coffee company from his mother and father, keeping the business in the family since its inception 111 years ago by his great grandfather, Walter Law. David’s lifelong professional dream to purchase the business his father had been running since the late 70’s had just been realized; his life was perfect.

Then COVID-19 hit and everything changed. Amid government-mandated shutdowns, David’s business took a huge hit.

For a business with a large percentage of its clients being restaurants and offices, the hit was immediate and sent shockwaves throughout Law Coffee.

“We laid off a third of the company,” he said, including close friends and family for their own safety. “We also lost about 70% of our sales within a week.”

David, a man who “never cries,” admits there were tough moments these past few weeks, including tears shed over the uncertainly of his family’s legacy.

But there is hope. A family doesn’t own a thriving business for over 100 years without doing things right.

His father and retired CEO, David M. Mendez lead the company through 9/11 and the impact of the 2008 Great Recession, so there were solid safety measures and a disaster management book already in place. David and his team were about to add a new pandemic chapter to that book. His father has also been a mentor and best friend during this trying time. Prior to shutdowns, Law Coffee developed and implemented safety measures to protect their employees and customer supply chains.

Mendez calls Butka a “psychologist” as much as he is a banker.

“He answered my calls all hours of the day, including Saturdays and Sundays,” David said. “Anytime I needed to talk, he was there providing sound guidance. He was really there when it mattered most.”

Anthony was a “calming” force, while fellow business owners, bankers and even friends were giving David massive anxiety with varying information, he said.

Law Coffee applied for the loan on April 6 and on April 8, Anthony called David to let him know the funds were already in David’s TD Bank business deposit account.

“This enables us to breathe a bit easier,” he said. “TD was absolutely spectacular. We received the money before anyone else I heard from that had applied with other banks. I’ve been hearing horror stories from some other business owners, who are just in the queue waiting to hear back on their applications or were flat out denied.”

But Law Coffee isn’t taking anything for granted.

“When the economy opens back up, hospitality is going to be one of the last industries to ramp up. There’s going to be a lasting psychological impact from this pandemic, where people may be slow to trust public spaces again,” David believes.

Coupled with the much-needed influx of cash, the business has consolidated down to a four-day work week, with increased compensation for employees. Law Coffee is already looking to hire two full-time positions that will help pace the business increase once the stay-at-home mandates lift.

“From that point on, it’s all about waiting for restaurants to reopen to full occupancy and trying our best to weather the storm together,” he said.

As for Anthony, he doesn’t see himself as any hero and will continue to be there for David, like he is for all of his customers. He’s not thinking about moonlighting as a therapist anytime soon though.

“In these times where there’s so much uncertainty over health and the economy it’s crucial that we as bankers do our part to help,” Anthony said. “It’s been a privilege to work on Paycheck Protection Program loans. We are truly making a difference in the lives of our business customers and their employees, while further strengthening our relationships for years to come.